Android malware based on SMS encryption and with KitKat support

September 23, 2014
Most of the malware based on the SMS C&C communication channel is not compatible with Android 4.4 KitKat. This is due to the fact that KitKat introduced a concept of one messaging app, which all other apps had to go trough before they send or handle a received text message. This prevented malware from hiding received short messages or sending without saving them in the "Sent" folder.


Well, it wasn't hard to predict that this state of affairs wouldn't last long and that malware authors would eventually catch up. Malware described here not only supports KitKat, but also uses an open-source SMS encryption tool as a basis for its code. Let's have a look at the insides of the new sample (hash: 84e2e9e8430792b583d02d3cc1bf8535) and let's call it SmsSecure, just for the sake of brevity.

I have to say that I did lie a bit. Well, I didn't tell the whole truth. Commands sent trough the SMS channel are not encrypted per se. Only the code for secure messaging is used as a basis for this malware, presumably because it supports Android 4.4 out-of-the-box and it is easier to encourage users to install "Secure SMS" application as a main messaging app. It has the same package name, org.thoughtcrime.securesms and hides main portion of its code in the x* (namely xlibs, xservices, xpack, xbroadcast) subpackages. These are responsible e.g. for sending received text messages to the C&C server.

There are two channels of communication: one trough unencrypted text messages and the other one trough POST requests, which body is encrypted using blowfish. So, all of this talk about "encrypted SMS" is just a scam.


Emulator detection and other techniques

What we are used to is that the Android malware increasingly has a code that detects whether it is run on the emulator or not. There are couple of usual checks (e.g. phone model) and a couple of unusual checks illustrated below.

Not that frequent technique is checking for the Network Operator and SIM Operator name. These names are hardcoded in the emulator and are equal to Android.

Another interesting feature is the configuration. Configuration is stored as the Raw Resources, because it is encrypted. Encryption method is Blowfish/CBC (IV="12345678") and the key is stored in the resource cleverly called blfs.key and the configuration is encrypted in two files named in the same cunning way: config.cfg and config1.cfg. However, if you try to just decode the configs using the key provided, you will fail. Key is somewhat "obfuscated" using a byte2hex function outlined below.

It takes every byte in the key file, renders it to a hexstring and then construct a new string of this hexstrings. The function that gets the key limits it size to 50 bytes. So instead of the key:

See if you can spot the fake one. Anyhow, that's it for the text-based C&C, but what about the HTTP-based dropzone? Well, there isn't any URL hard coded. The dropzone URL comes via the text command.

Each command is send in a following form (the originating number is completely ignored):

Two last values are optional. control_code should be one of the 6-digit predefined codes. service_code is a number to which the logs will be send (as a text messages) and will be updated no matter what the issued command is. What are the possible commands? Well, there are eleven of them, listed below.
The application also supports blocking messages from some numbers. These numbers should be contained in the "filters" variable (separated by the semicolon) and can only be updated via the HTTP or in the starting configs.

This is a fine example of the malware evolution - now completely compatible with KitKat. It even checks whether you have set it as a main messaging app already and displays a pestering notification if not. It also tries to do some targeting based on the SIM operator (as pictured below). However, this function is never used in the code, as it was probably dropped at some point by the authors. Anyhow, the targeted countries were supposed to be Austria, Russia and Switzerland.

However, my favorite part is how they extensively log everything and use "setted" instead of "set". 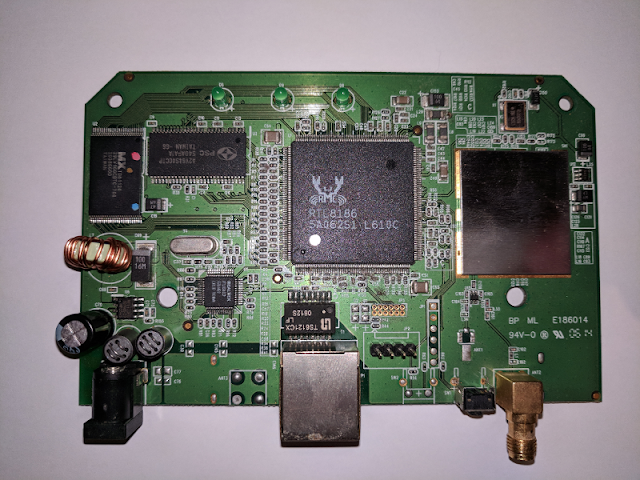 When I moved to my new apartment I discovered a lot of old, mostly networking-related, equipment that I was meaning to either sell or throw out, but I never got to it. Recently I also bought an Arduino and decided to learn something about a lower level of reverse engineering (e.g. the CTF binaries from RHme 2 ). This two things combined mean it's time for some router reverse engineering! A word of warning: before I started playing with low level RE I didn't know anything about electronics. If you have some experience with hardware hacking, this post may be a bit too basic. Typing random numbers into a search bar My victim is the Edimax EW-7206APg wireless router. The very first thing to do is to remove the screws and look around the PCB (yes, I know that the lighting is horrible). As you can see there's a huge chip in the middle of the board and some additional smaller ones to the left and next to the Ethernet port. They all have markings, so obviously my first i
Read more

May 25, 2015
Martijn Grooten on Twitter  (with his signature sarcastic undertone) posed a weekend challenge for anyone interested in cryptography: have fun with Crystalline Cipher and show that it is fundamentally broken. Now, I've met with Martijn only once, but from that meeting I gathered that he really loves mathematics, at least as much as I do, and has a great understanding of cryptography. This whole business with Crystalline started off with the discussion on irtf.org , when the cipher author was convincing everyone that he discovered the best cipher in the world.  But to Martijn, mailing list members and me the cipher has a smell of snakeoil. Since this weekend turned out to be rather free for me, I decided to have a go at cryptoanalysis. Mind you, I'm not in any way formally trained in cryptography. I've had two one semester long cryptography courses - one from more mathematical standpoint and the other one from more technical standpoint. The most complex cryptographic
Read more 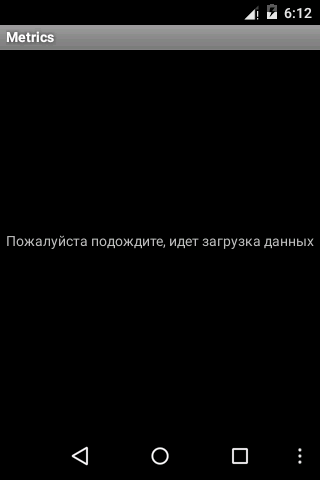 In December I attended a (really great!) Botconf 2014 conference. During that conferece I gave a  lightning talk about an interesting Android malware sample that (presumably) used Lua and Mono (hence, .NET) as a way of obfuscation. Very recently  @tbiehn  Tweeted to me a solution for a problem that I run into during the analysis. So now, below, you can find details about the weird Lua/.NET/Java Android sample . It says "Please wait, loading data" Quick overview It starts fairly innocent, with an app called Metrics.Me and it has a pretty standard malware permissions, as can be seen on a screenshot below. It uses a VKontakte icon, probably to pose as a kind of social media app. The main and only screen of this app is shown above. Let's start with the usual place: the SMSReceiver . And now things get a little complicated. There are a lot of references to the "monodroid". It turns out that this is actually a Mono (.NET) implementation in Andro
Read more